Here I’m mostly going to focus on professional achievements. This year has had a lot of change personally too, but I’m not so interested in telling the internet about that.

I became a Microsoft MVP in 2018, and that’s been brilliant. I’ve already met a lot of people because of that, and this upcoming year will be even more exciting because of that.

I started the Knoxville Microsoft Azure Meetup in 2018 and I hope to grow it tremendously this upcoming year. Lot of amazing stuff going on in the cloud.

I’m doing better at blogging things as I learn things, or as I investigate something new. Most of my blog topics are just something neat I found, and not something I’m using at work.

I published 32 blog posts this year.

Google analytics is not my strong point of understanding. I set it up, turned on what anonymization flags I could find, and hoped it was setup properly. I haven’t taken the time to really make this right. I don’t care so much about exact numbers as much as just guidelines telling me the relative performance of each topic.

My GitHub profile is definitely greatly increased since 2017. There are certainly gaps in there, but I’ve been working on stuff as I can. A few gaps in there represent working on closed source items on other platforms or personal time, and that’s okay. 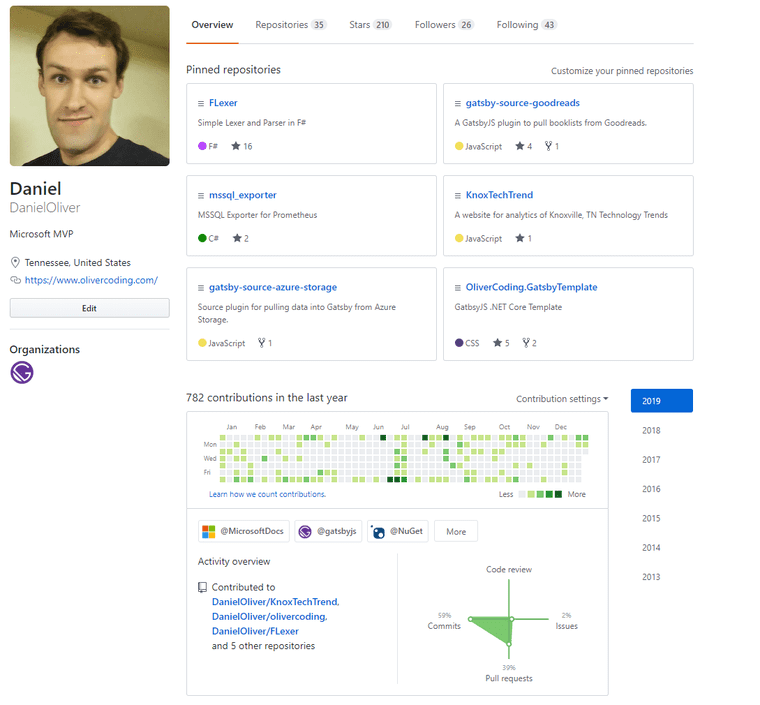 Started speaking at conferences and meetups

The complete listing of talk abstracts and locations is here. I’ve given 4 talks, a total of 9 times, at a total of 6 venues.

I’ve been on several podcasts this year:

Notable technology I’ve worked with in 2018

What I did above doesn’t show how I got there or what I’m doing to go further. The short version of that, is that I have good friends and good work colleagues and good books. 2019 is going to be an awesome year!!!