The previous year of 2018 review is here.

I became a Microsoft MVP in 2018, and then I got it again in 2019. I’ve met a lot of people because of that and it’s helped make introductions more easily. I’m very fortunate.

I started the Knoxville Microsoft Azure Meetup in 2018 and it grew a little in 2019. Lot of amazing stuff going on in the cloud. Keeping a tech user group going in Knoxville has gotten a little harder. I’m not sure what’s changed, but I think across the board in Knoxville attendance hasn’t grown much.

Less blog posts were published in 2019 compared to 2018. But I had some winners with Angular and Azure DevOps and a few others. 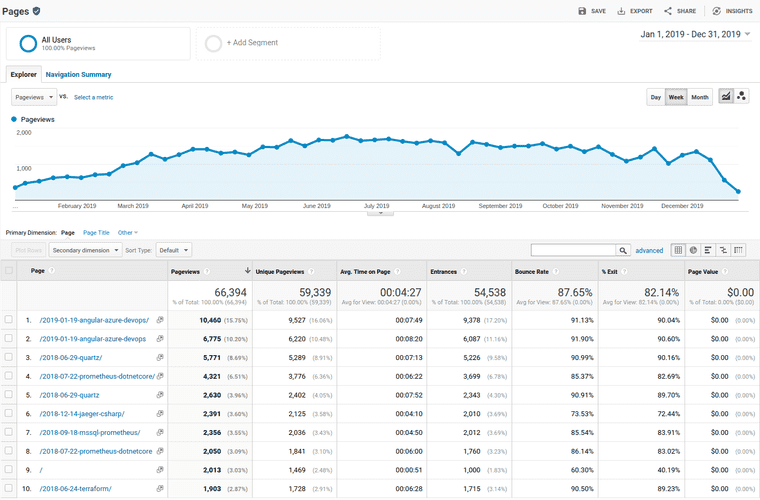 Impressions doesn’t mean much of anything, but it’s interesting numbers from Google Search Console. 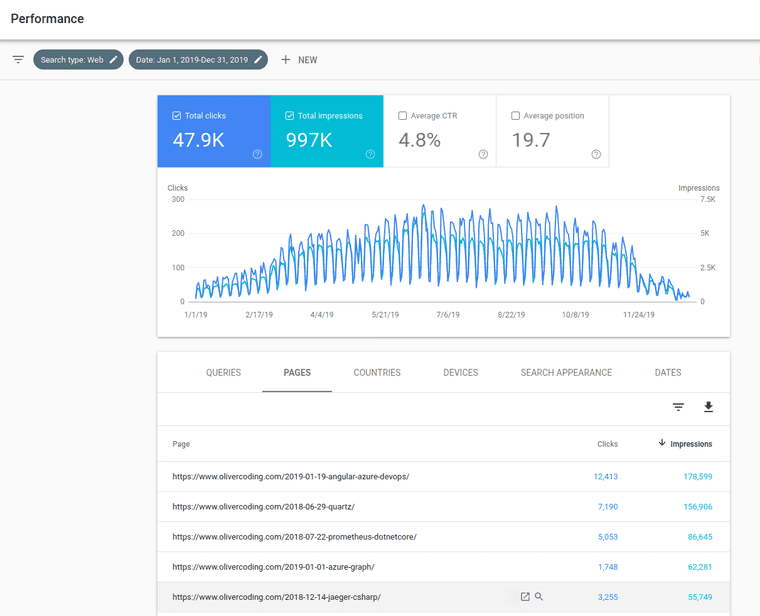 I updated a few projects on NPM, NuGet, or Docker:

My GitHub profile is definitely greatly increased since 2017, but down just a little from 2018. There are certainly gaps in there, but I’ve been working on stuff as I can. A few gaps in there represent working on closed source items on other platforms or personal time, and that’s okay. 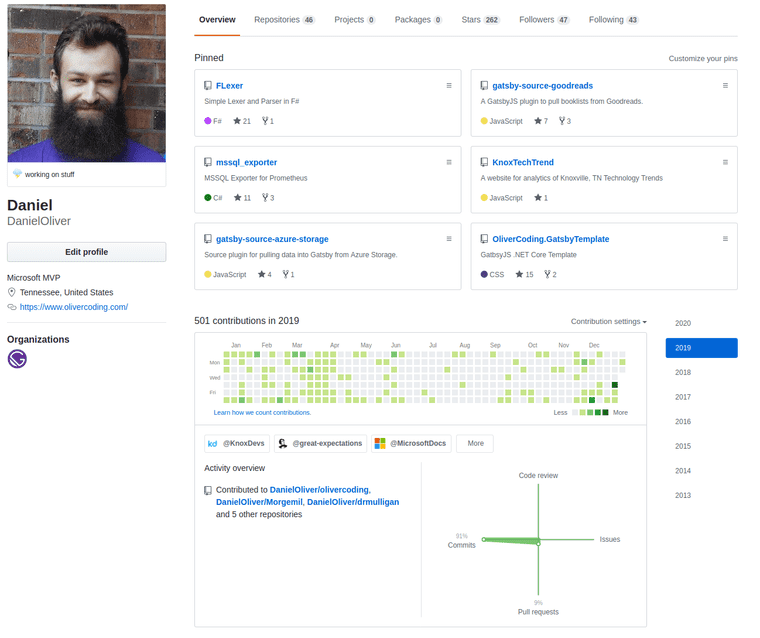 Speaking at conferences and meetups

The complete listing of talk abstracts and locations is here. I’ve given 2 talks, a total of 5 times, at a total of 4 venues.

I joined the Music City Tech Conference team this year of Nashville, Tennessee which is funny because I live 200 miles away in Knoxville, Tennessee. Though I did used to live in Nashville.

The work started months before the conference actually happened I reviewed and ranked hundreds of conference talk submissions. I answered dozens of emails and calls from speakers with questions about lodging, about microphones, about all sorts of things. And I’m afraid to say I got so much wrong, for which most everyone was very understanding.

Then during the conference I sat behind a registration desk, I stood in the hallways, I answered questions while at the hotel, and I was generally just talking to people who had a concern, feedback, or criticism.

I knew nothing when I started, and I learned a lot, and I still have a lot to learn. The fantastic folks who work on the Music City Tech conference put in a lot of hours and unseen work. I hardly did anything compared to the hard workers there. I hope to return and do more to help out!

Technology trends in 2019 in my career

Other Education and Experiences

It’s impossible to capture all progress made purely in technological buzzwords above. So I want to call out some education and experiences this year.

I worked fully remote during the first half of 2019. I really enjoyed it and I got into a rhythm. I had one space dedicated for work. Every morning the smell of coffee and the alarm became a form of classical conditioning where I’d automatically start walking towards my standing desk to log into work. It worked out really well since the normal work hour times to stop coincided with when I’d get hungry for dinner. The bad side of course is less people on a daily basis, but a lot more video conferencing. Overall, it was enjoyable.

Money rules business. I went down to the local used bookstore and bought an used collegiate intermediate accounting book. I’ve been working through the book slowly and trying to learn more. I’ve done a lot of programming dealing with money, but I’ve never truly understood the backing theory behind the given business logic. Combined with programming skill, I hope that a better understanding accounting will unlock new capabilities in my career.

I’ve read a lot more books than this, but these are a few select influential ones. Influential in that they changed my professional behavior the most.

Multiple, separate groups of friends play this role-playing-game, so I knew it was around. Then one week a group asked me to be a Game Master, and I said yes. The rest is history.

Being a D&D Game Master may seem like an odd thing to put under a professional review but it completely fits. The similarities to leading a software team are abundant: everyone on the team has a different personality and attacks problems differently, getting a group of people to work together can be challenging, keeping a group of people focused and engaged can be difficult, feeding them “work” (or quests) is a constant shuffling and prioritizing, sometimes people change jobs (or gaming groups) and the dynamic changes, and creating guidelines for the team to work within is a blurry grey line.

Focus on the Team

I’m not going to list out details of jobs, I’ll leave that to my LinkedIn. 2019 was a stellar year for me. And I know that no matter what 2020 holds for me, my attitude in facing it will determine much of the year. Let’s be positive, optimistic, and see the good all year long!

Next: 2020 in Professional Review