I’m making digital adaptions of some of my favorite board games, so I can play single player on the laptop against AI players.

Players have entered the entity relationship diagram. The player object relates to companies via stock. 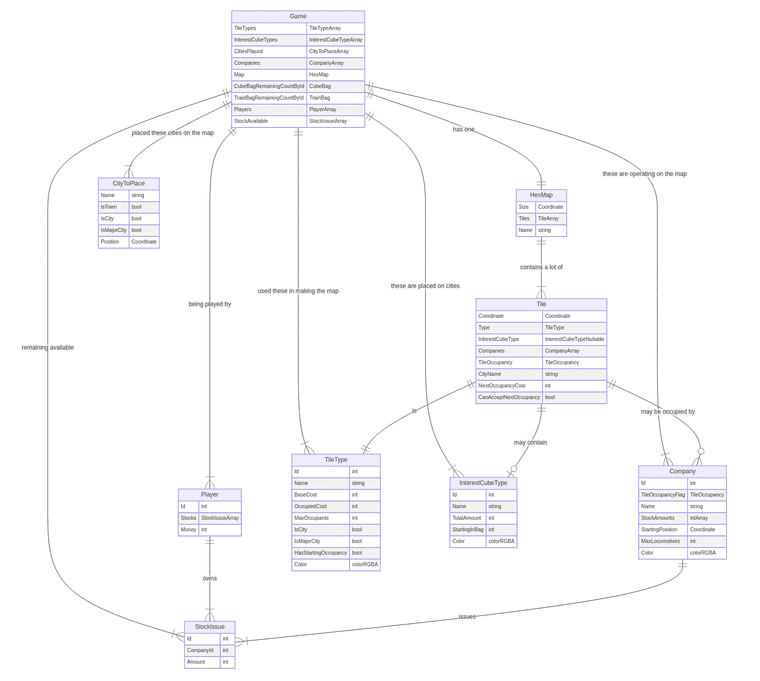 The data structure is only four fields.

The list of players in a game is initialized each game from a player count parameter.

That above snippet of code fairly represents how most of the starting information is built. A simple for loop for each of companies, players, tiles, and all the information that makes a game.

A lot of time has gone into the map since the last update.

That mouse hover over elements caused a significant amount of refactoring to link drawn triangles to the underlying game elements.

Each visual collection of drawn triangles keeps track of the smallest possible box that contains all the triangles. This box is a bounding volume that makes mouse cursor checks easy. If the mouse cursor isn’t in the box, then no need to check each triangle within.

If a box is found that the mouse cursor is in, then it’s fine to check all the triangles that make up the shape. A hexagon here is using six triangles.

Further, this process of checking for the mouse cursor hovering is hierarchy. Each hexagon tile may contain elements within it, squares representing a company or an interest cube. The first element in that hierarchy is considered to be the highest priority one. A company cube will be picked before the tile even though the tile is sharing that same space.

The game loop has been started. A current phase field has been added to the Game struct.

Every game of Irish Gauge starts off with an initial auction.

I haven’t yet gotten any further on the game loop.